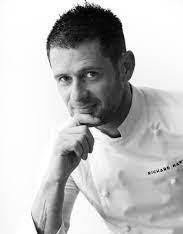 Originally from Sydney (Australia), Richard discovered the art of pastry with a classic French pastry chef in his first job. After finishing his apprenticeship, enthused by this encounter which inspired him, he obtained his visa for France with a dream of learning from the greatest.

After several years of working in different structures in and around Lyon, France Richard secured his dream position at the renowned school of Alain Ducasse and Yves Thuries, l’Ecole Nationale Supérieure de la Pâtisserie.

After various international experiences of living and working internationally (Morocco and also Slovakia), Richard is now based in France.

Richard has now spent over the last two years concentrating on better understanding new pastry techniques which is going to push the boundaries of our pastry knowledge.

He defines his daily life in three words: research, travel and family. Time is now spent in his laboratory where he continually develops and refines an ever-increasing variety of creations, with family on hand to test and critique his current recipes. As well as the research process, he travels abroad for pastry masterclasses, allowing him to share and transmit his passion, passing his skills on to enthusiastic students.